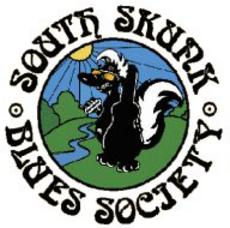 The South Skunk Blues Society is a non-profit 501(c)(3) organization dedicated to preserving and cultivating Blues music. The Society promotes public performance opportunities for Blues artists, and seeks to increase the exposure to and appreciation of Blues music by the general public.

The South Skunk Blues Society (SSBS) was founded in September 1992. At the time there was very little live music, especially live blues, in the area. If you wanted to see a blues performer, you had to travel to Des Moines, Ames, Iowa City, Waterloo, Cedar Rapids, the Quad Cities or clear to Chicago. Our mission has always been to provide live blues and roots music to Newton and the surrounding area. The mission is broader, though, than just entertainment.  As a federally recognized non-profit 501(c)(3) organization, we are dedicated to preserving and cultivating Blues music, promoting Blues Music education, providing and supporting public performance opportunities for Blues artists, and increasing the exposure to and appreciation of Blues music by the general public.

Blues has its roots in various forms of African American slave songs such as field hollers, work songs, spirituals, and country string ballads. This rural music that captured the suffering, anguish, and hopes of 300 years of slavery and tenant farming. Early blues was typically played by roaming solo musicians on acoustic guitar, piano, or harmonica at weekend parties, picnics, and juke joints. Their audience was primarily made up of agricultural laborers, who danced to the propulsive rhythms, moans, and slide guitar. The value of live blues music still lies in its ability to entertain and connect with the audience. It also affords the opportunity to create a community within a community.  It is the true American music and the roots of many other genres including Rock and Roll and Jazz.  Muddy Waters once said, “Blues had a baby and they called it Rock and Roll”.

A dedicated group of Blues fans volunteered to put on the very first Bowlful of Blues in the summer of 1993.   Over the years, the South Skunk Blues Society has hosted many blues performers in our area.  Many individuals have taken their turns as leaders and volunteers of the Society. Many, many hours have been volunteered to keep the South Skunk going and, as a result of this, the Skunk has survived.  The Bowlful of Blues has become a tradition where friends and family can gather, listen to great music and enjoy the summer weather.

In the early years, SSBS produced shows on a monthly or bi-monthly basis. Our home base for several years was the Terrace Inn in Newton, but we also produced shows in State Center, Baxter, Kellogg and Grinnell.  We have evolved to the point that we encourage local venues to bring in Blues entertainers rather than produce so many shows through the society. Cadillac Jacks in Baxter and Side Tracks Tap in Kellogg were venues that brought live Blues music to our area. Colfax Main Street and Sugar Grove Winery and Gathering Place have hosted Blues Bands, and the local Arts Connection has also brought in Blues musicians to perform at some of their events. The Newton Legion and VFW also have been venues for the Blues and we are now seeing Blues music in venues in Marshalltown and Pella.

Through the years the South Skunk Blues Society has also provided Blues in the Schools with artists including WC Clark and Sunny Rhodes providing educational Blues performances in the Baxter School.  In 2011 a broader Blues in the Schools effort was begun. Blues musicians/educators have come to educate local students through the South Skunk Blues in the Schools programs, and have included Kevin “BF” Burt, Fruteland Jackson, James “Super Chikan” Johnson and Liz Mandeville .  Children attending school in Colfax, Baxter, Newton Elementary Schools as well as students at the Newton DMACC Campus participated in this educational experience.

The Blues Under the Blue Roof series was held weekly in February until it was recently cancelled due to the Covid-19 pandemic. The event was produced by the South Skunk in conjunction with the Friends of the Newton Library and The Arts Connection.  The year 2020 also brought many challenges due to abnormally severe weather, resulting in cancellation of events and venues. The South Skunk was able to produce a blues show in September by moving the original venue to a small neighboring town, thus "The Blues Roll On" show was born in Kellogg's Holmdahl park. Finding it a success, with proceeds going to the HART foundation, a second show was held in May 2021.  As we learn how to deal with the pandemic it is our sincere hope that the Bowlful of Blues will continue annually as it has for the past 30 years.

The organization has joined as a member of the Newton area Chamber of Commerce and is a member of Newton Convention and Visitors Bureau.  The South Skunk Blues Society has become an integral part of the area's social fabric and in 2014 the City of Newton recognized the Bowlful of Blues as an event that people should attend to “Get to Know Newton”.